June 12, 2019
No it isn't a spelling error, it is Welsh!  Castell Coch is as you'd guess it would be, a castle.  I'm not entirely sure of its origins or history but locally it is know as The Fairy Castle.  It holds many memories for me personally as it is where my late uncle married and more recently where my childhood friend married also.

The castle isn't particularly big in comparison to some of the other welsh castles, but it remains a solid favourite of mine because of it's secluded location and grandeur.  As you approach the castle it is mostly hidden by dense woodland with only the tops of its turrets visible above the trees. 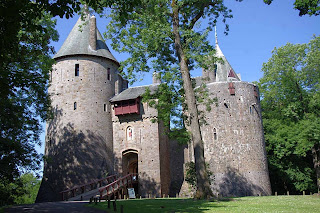 The name The Fairy Castle led to the recurring appearance of this majestic building in many of my short stories growing up.  For some reason, I have always had an affinity towards creatures of myth and legend and even more so if they are magical.  So I hope this little snippet of home gets you writing, think of the fairies that live here, what is their purpose, who do they serve etc.?
Tell their story.