Immediately you have to wonder why the Post Office felt the need to release this statement.  Surely nobody would send their child via post?  Wrong!  After several instances of children being sent around the US via the postal service the above statement was released prohibiting this.

Yesterday's word of the day was nonsense; if this isn't nonsense then I don't know what is.  Obviously, in this day and age I don't think anybody would dream of posting their child somewhere but that is mainly because the postal service is terrible and they'd probably get lost. 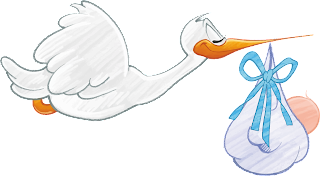 I think this is a great idea to begin the opening of a children's story.  Instead of a babe being delivered by a stalk bundled up in blankets, why not have babies delivered by the Post Office?

Challenge
Open the scene with a new baby delivery turning up in the morning and see where it takes you.  Think about how the baby got there, was it expected or do they just turn up unannounced on the doorsteps of unsuspecting couples?  Have fun with it.