Spirit was named via a student essay competition and soon became a great achievement for NASA.  The Spirit rover performed far beyond the expectations of its creators.

Its mission was planned for a duration of 93 earth days where it was to travel 600 metres collecting and transmitting data back to NASA.  Spirit actually remained operational for 2,269 days and had travelled 7.73 kilometres at the time of its last transmission. 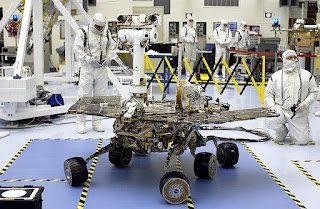 This goes to show that with a bit of ingenuity anything is possible, and if NASA can put Spirit on Mars... just think what we can achieve with our imaginations and a whole load of the grit and dedication that it take to be a writer.